Presidential elections in the context of the puppet theatre.

Edition ARI decided to resume the publication of text materials on major topics of concern to the public. While this test materials. If possible, publications will be 2-3 times a week. Ed. ARI

Presidential elections in the context of the puppet theatre.

Every few years the people of Russia have a unique opportunity for almost nothing to witness one of the most expensive, the most planned puppet shows in the country – the presidential election. Because according to the Constitution, and similar important documents that are recognized to protect human rights, elections are “the most significant event in the life of the country”, and casting of puppets is the most thorough way. Any misstep will cost the producers dearly, because every puppet in the hands of the puppeteer has a clearly defined role, designed to persuade the people to need for puppeteers action at the end of the play.

Here on mind involuntarily comes a tale about Buratino, or Pinocchio, it depends on whether you like more harsh and instructive original Collodi, or the adventure to find the key to Tolstoy with a Field-of miracles and the land of fools. Remember, Tolstoy was such a character – Pierrot? His role in a puppet theatre, make-up and the onions put on his person an indelible mark: he’s always whined, cried, and his romantic song fully reveals its essence – saw the difficulties, you need to give up. His lack of confidence in the victory and the eternal whining, Piero is pathetic and reminiscent of Mr. Yavlinsky, who has many years of composing romantic songs, and “Malvina” (read the presidency) and not give in to his charms. And not because he’s a bad person, or wrong promises to the people, and therefore that a puppet show can not do without a hero, which is a pity.

Since were talking about Malvina, her character may be compared with Ksenia Sobchak if She didn’t open her mouth. 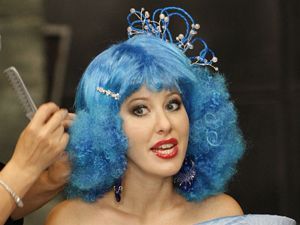 And no, it’s not in her crown smile, which is, instead of anecdotes, legends, and incontinence in their statements against the media persons and “rogue” who can’t afford a holiday abroad at least a couple times a year. If somewhere appeared Sobchak – wait for scandal (Russian national sign). And in these races (read “presidential race”), Ksenia took part, not because he believes or wants to believe that will take the place of the President, and only in order to spur baboucek to move from the benches to the elections, in order not to give the many fans of “House-2” beat in most forces “fighters with prostitutes and drug addicts” – in simple terms, the objective of this doll with Nemacolin vocabulary to increase turnout among pensioners. Yes, and without a clown the circus is not the same.

By the way, about Xasino favorite pastime is to smear the middle. Back in 2008 went from journalist and public figure, one of its current rivals in the production of “the struggle for the post of the President,” Elizabeth Gordon. Invited to the radio live, She brought leading Lisa Gordon to hysteria, and contributed to her subsequent dismissal. Poor Liza after a job loss have not given up and now decided to participate in the global Russian puppet production. The viewer would be boring without antipode “Sobchachke” decent of semyanenka, the mother of two children, which makes for itself a main objective – take care, in case of victory, about mothers having many children (daddy, smoke on the sidelines), and on improving the demographic situation in the country (dads, can come back from a smoke break). All is good, if Lisa was more mentally stable: if any word Sobchak brings her to tears if Gordon does not spoil your nervous system to complete its role in this puppet drama? In General, the promise of this Duo Sobchak-Gordon to the public – all on sobachii elections!

Another goodie is the representative of the Communists Pavel Grudinin, or “strawberry king”. His interesting biography makes it clear to the attentive viewer that the hero in the role of the promoted worker from the Communist party chose carefully, so that soon nobody thought Grudinin can win. But who knows what to him are the plans of the puppeteers. Zyuganov has become familiar, and new faces and fresh blood is necessary for good performance, otherwise the audience bored, and this means that the turnout will fall. And if no one comes to the elections, and for whom, the puppeteers spent money and prepared for the show! But there can be a minor character positive in everything! Because in the press they write that Grudinin, remembering their Jewish roots, pressed the land from the peasants by “strawberry fields and gingerbread houses”, that rumor somewhere will be that strawberry-with “state Farm. Lenin” Turkish for sale! Here was information that he zits-the Chairman delivered Abramovich. And still sho you like: Grudinin copes with the role perfectly, the media to help him. Red potsreot, despite the searing anti-Semitism and the hatred of the oligarchs, took it on hurrah. Discipline, however, the Reds.

For completeness of perception of the whole crowd in the race for the presidency, still need a pair of clowns. Vladimir Zhirinovsky has long served the theatre, and quit his post, he does not allow debt service. To hide her sharp mind behind the mask of a brawler and Joker – here it is, a true talent! Here it is a confession! It is hard to imagine elections without Zhirinovsky is like a wedding without a toastmaster. Constant constant stability inspires and attracts his admirers in the polls. Its constant audience he had built up over the years, from such actors, the puppeteers don’t get, and the actors, as we know, retirement can in 90 years will go, then, they are actors.

Bulk. Well, where do without him? The whole world is watching his vain attempts to fight through the courts to the polls: someone unhappy with his game, someone have to like his calls to boycott the elections – all scenario. Navalny’s role in the division of opinion and foment debate about his candidacy among the population. And while he copes with this role, his name will not go with the headers of news feeds.

The same can be said about other candidates for the post dolls with their roles and stories designed amid their flaws to highlight the Main character of this action in the right light. Time goes by, the world is changing, always only one, never the puppeteer will not allow a woman Nura (no offense to women, Th said), which in addition to his native village and 8 years of education didn’t see anything, decide who will be the main actor of his puppet theatre. Of course, any puppet theater needs an audience, but then everyone chooses their own – to enjoy the view, sitting at home watching TV with popcorn, or join the crowd at the polling station.